My father, Johan Albert Rusche and my mother, Constance Anna Rusche (Herrebrugh) were both born in Indonesia, the former Netherlands colony for over 300 years called the Dutch East Indies. They held European legal status and were known as Indo, short for Indonesian-European.

Louis Reynard Herrebrugh was born  on October 13, 1890. The son of Andries Michiel Herrebrugh (1860-1922) the owner of the Nutmeg Plantation Matelenco on the island of Ay in the Banda Islands of eastern Indonesia.

More about the Herrebrugh Family… 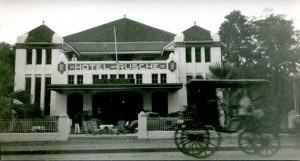 The Rusche’s were from Solo also known as Surakarta in Central Java. They had built a hotel and operated a premier publishing house, Albert Rusche and Co.

Johan was a Prisoner of War of the Empire of Japan during WWII for 1215 days!

He was onboard the sinking of the Hell Ship called the Junyo Maru.

Of the 6,500 prisoners, 5,620 lost their lives in the sinking. 723 Survived. The survivors were all taken to work as forced labor on the Pekanbaru Death Railway.

The Herrebrughs went to the Banda Islands, holding the riches from the monopoly of the spice nutmeg. They operated many plantations on the islands for several generations.