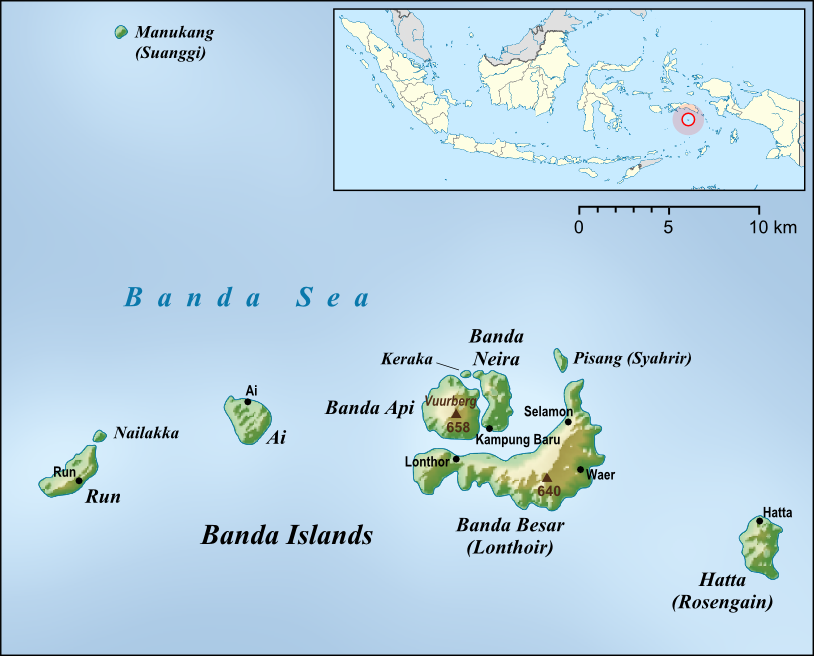 The Banda Islands (or Spice Islands) of Indonesia were first inhabited some 8000 years ago. It was the only source in the world to find the highly valued spices, Nutmeg and Mace.

Traders did not divulge the exact location of their source and no European was able to deduce the location until the Portuguese in 1511.

Nutmeg had a higher value than gold!

In 1602,  the Dutch formed the Vereenigde Oostindische Compagnie (VOC) (the ‘Dutch East Indies Company) [8]  to monopolize the spice trade from Banda. Many bloody years ensued in the fight for control of the islands between the Dutch and the Bandanese. In 1621 the Dutch with Japanese mercenaries butchered and beheaded over 13,000 natives leaving less than 1000 survivors.  The VOC then imported slaves, convicts and indentured labourers to work the nutmeg plantations.

The agriculturally productive lands were then divided into 68 1.2-hectare perken and handed over to Dutch plantation administrators known as perkeniers. With the monopoly in place, the VOC and perkeniers quickly became wealthy, building opulent Villas in the main town of Bandanaira.

The English claimed the Banda Island of Run until 1667 when it was traded to the Dutch for New Amsterdam (New York) under the Treaty of Breda.

Many natural disasters have plagued the islands. The 2100 ft active volcano Gunung Api on Banda Api juts out of the very deep Banda Sea creating The Banda Islands, and has erupted frequently throughout history. Banda has also suffered from many earthquakes, hurricanes and tidal waves.

In 1778 an eruption, earthquake, hurricane and tidal wave destroyed the islands and left the perkeniers bankrupt.

Around 1790, Evert Coenrardsz Herrebrugh first came to the Banda Islands from Amsterdam. In 1794, at age 22, he marries Elisabeth Leunissen in Banda Naira. They establish the nutmeg perk “Matalenco” on the island of Ai (Ay).

In 1796 , the Dutch yield the islands to the English in order to not be taken by the French during the Napoleonic Era. In 1803 Banda is back under Dutch control and they begin to recruit new civil administrators to replace the defunct VOC as the new NHM (Nederlandsche Handel-Maatschappij)

From 1810 through 1817 Banda is back to English occupation under Captain Cole. A hurricane struck in 1815 followed by two big earthquakes in 1816 and 1820. In 1817 Banda goes back to Dutch control. Perkeniers lead lavish lifestyles and assume heavy debt.

In 1845 – The Dutch give the perkeniers titles to their perks and are now independently owned.

1859 – Charities from afar reduce the debts of perkeniers.

1904 – The perks continue to be heavily debt laden and had to be sold to N.V. Kok, a Chinese family that bought perks competing against the NHM.

In 1908 – Louis Reynard Herrebrugh moves to Ulee Lheue, Banda Aceh, Northern Sumatra as the Plantations were lost and becomes a Customs Officer.

1958 – The nationalization of Indonesia converted the ownership of all the perks to the new Indonesian state.